JUDY WOODRUFF: Imagine discovering that a painting on your wall is a long-lost masterpiece. In two recent cases, the story centers on Jacob Lawrence. Lydia Gordon of the Peabody Essex Museum in Massachusetts is our guide, part of our Canvas series. 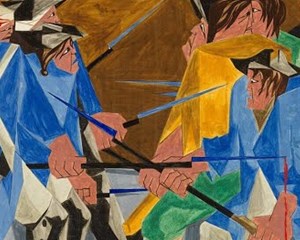 LYDIA GORDON, Associate Curator, Peabody Essex Museum: So, I have never experienced lightning striking twice, but this very much feels like that experience. Jacob Lawrence was the most famous Black artist of the 20th century. The Struggle series for me really solidifies Lawrence's visionary artistic impact. We're working at the dawn of the modern civil rights movement, when American art is really entrenched in abstraction, and he has his own synthesis, his artistic ingenuity and individuality, to tell the stories that are really underrepresented in the history books. Finding missing works of art is incredibly rare. So, panel 16 was discovered because a visitor to the exhibition's installation at the metropolitan museum of art in New York was standing in the gallery seeing this narrative series and looking at the holes on the wall where the missing panels would have been. And she thought to herself that, gee, I think my neighbor has one of these panels. And it happened to be panel 16, which is incredible because we didn't actually know what it looked like. There's incredible golds and greens that Lawrence uses for the citizens army, and then the cool blue he uses for the American revolutionaries. But across the panel, all the faces of the soldiers are in complete despair. So we worked with the owners of panel 16 to get their painting on the wall at the Metropolitan. And about two weeks later, the owner of panel 28 is reading her community bulletin, and saw the name Jacob Lawrence and recognized it, went over to a painting in her home and, of course, saw Jacob Lawrence's signature at the bottom of this painting that had been hanging in her home and in her family for decades. She marched over to the Metropolitan in a very New York fashion and asked to speak to speak to somebody who worked on the exhibition and helped make the connection that if she had another missing painting. Panel 28 is really interesting, because we did have a black-and-white image of it. So, when we were able to see the painting in its full color, things were revealed to us that we couldn't see before. So, the figure in the middle is holding what we thought was a prayer book, but is actually a rose, a potted rose. The figure on the right is holding a baby. Lawrence included not only founding fathers in this story, but he included the stories and the contributions of women, of Native Americans, of enslaved people, Black people, Europeans. To have not just one, but two paintings surface that -- across the exhibition's tour is incredibly hopeful and optimistic. And I'm certain that we will be able to reunite all 30 panels.

JUDY WOODRUFF: Three paintings of Jacob Lawrence's Struggle series remain missing. Struggle is currently on display at the Seattle Art Museum through May 23.